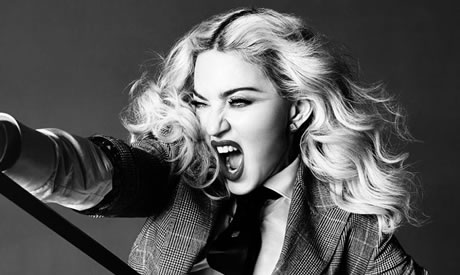 Whatever you call her, Madonna has been one of the greatest influences on music, fashion and pop culture over the last forty years.

Madonna was born in 1958 to Catholic parents in Michigan. When she was five her mother died and her father remarrying was the catalyst that seeded her rebellious attitude against conventionality.

“The bravest thing she ever did”

She was a straight A student throughout high school and when she graduated, landed a University dance scholarship. But she dropped out and moved to New York to pursue a career in dance instead. She has said that was the bravest thing she ever did – relocating to a brand new city with just $35 in her pocket.

Eventually she began working as a backup singer and dancer for other artists, formed her own bands, and then became a solo artist.

Her first two singles were well received and her first album peaked at number 8 on the Billboard 200. But it was her next album, ‘Like a Virgin’, that topped the international charts and made her a star. As the years passed, the hits kept coming, she appeared in several movies and her music tours became large and lavish theatrical productions.

Part of Madonna’s constant appeal was the way she reinvented her image over and over, leading and reflecting the fashion of the day. From the thrift shop club dancer, to the Marilyn Monroe lookalike, to the black corsets and religious inspired jewellery, to the biker girl, to the sleek sophisticate – everything Madonna did or wore was photographed, envied and imitated.

She aggressively flaunted and celebrated her sexuality in her music, on stage and with her image and became a feminist icon for women everywhere. She is lauded as a super successful businesswoman and a dynamic entrepreneur. Naturally, she’s a multi-millionaire and shows no sign of slowing down.

So what has made Madonna so successful and what lessons can we learn from her? Three key things are:

1: Madonna doesn’t just have musical talent, she has a talent for working hard. We can see her persistence and determination emerging at an early age in her dedication toward her studies. And looking back on her career, her CV is impressive – not just for the amount of awards won, but for the sheer volume of work she put in to win them.

2: Madonna understands her chosen industry. She knows that music fans are fickle and are always looking for the next big thing. And by constantly changing her appearance and the sound of her music, Madonna has been able to deliver. In that sense, she is a chameleon, able to adapt and react to the changing times so quickly that she often rode the wave of change as it crested and was then seen to be driving it.

“She is ruthless and single-minded when working toward her goal.”

3: Madonna is focused. Her peers have said that she is ruthless and single-minded when working toward her goal. Distractions are unacceptable and an opportunity is there to be exploited.

Madonna is a fantastic example of what it means to start from the bottom and come out on top, with nothing more than determination, persistence and a dream.