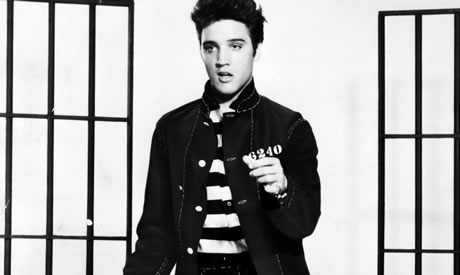 Elvis Presley was one of the biggest stars of the twentieth century. His smooth, gravelly voice, provocative lyrics and laidback sense of fashion cool, made him an icon worldwide. By the end of his life, aged just 42 years old, he was one of the biggest selling solo artists in history, with three Grammys under his belt, along with over 30 films in the can.

“A shy boy who kept to himself and hated to sing or play in public.”

But nobody becomes a star overnight and Elvis faced plenty of challenges along the way. He was born a surviving twin in Mississippi. His parents weren’t wealthy and moved around, chasing occasional odd jobs, but they attended church as often as they could. This was where Elvis first learned an appreciation of music. Guitar lessons soon followed, although Elvis was a shy boy who kept to himself and hated to sing or play in public.

That changed when a friend took him into a local radio station and Elvis was given a chance to sing and play. By all accounts, he froze with nerves that first time, but managed to get through it when given a second chance a week later.

His school music teacher told him he had no aptitude for singing, but he persevered anyway, forming a band with his friends, and developing his own sense of style. He appeared in a talent show which surprised many of his peers who had no idea he could even sing.

“He failed an audition”

A string of setbacks followed; he failed an audition for a vocal quartet and then as a vocalist for a band, with the band leader telling him he’d better stick to truck driving instead.

Elvis’s big break came when he was fooling around in the studio with his friends, and it sounded so good, the song was recorded and then given airtime. That song, “That’s Alright” launched Elvis’s career.

Up until that time, Elvis had been trying to conform with what he thought others wanted to hear. He was often told he had no singing talent, because he wasn’t singing what came naturally to him. Elvis’s musical roots were in Gospel music and in the African American sound of blues and jazz. When he was messing around in the studio singing what came naturally to him, success was quick to follow.

His first few tours and performances were muted affairs as he worked through his nerves and stage-fright. But as time went on and he learned which choreography and moves garnered the largest audience reaction, he remembered and developed them so they became his own.

“A success story who pushed on through in spite of the negative reaction from others.”

Elvis is the classic example of a success story who pushed on through in spite of the negative reaction from others. His passion was music and he immersed himself in it, learning from his failures and going from strength to strength. He focused on what made him happy, singing the kind of music he loved, and that made others around him happy too.

Where does your passion lie? What makes you happy? Find your sweet spot, work on it wholeheartedly and success will surely follow.