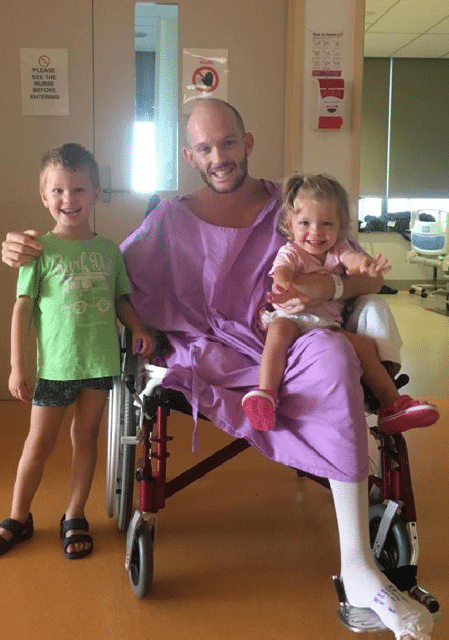 Glenn Dickson never takes his life for granted these days. Who would, after narrowly surviving an attack by a 3.5 metre bull shark?

Glenn with his children

It happened on February 18th. Glenn was on a spear fishing trip with his mates off Hichinbrook Island near Cairns in far north Queensland. He’d speared a parrotfish, and was swimming upwards when he felt an immense pull and shake on his leg. Then the shark turned away and came back to strike again, severing every artery in Glenn’s thigh and gashing his calf.

He should have died. If it hadn’t been for former Navy master diver Rick Bettua, he would have. Rick worked desperately to make him respond after he was hauled into the boat by punching him on the chest and applying tourniquets.

Rick says that Glenn was in an extremely bad way and estimates that he died six times during the frantic dash towards land. Once at the marina, there was only one paramedic to help Glenn’s mates until the rescue chopper arrived. The crew were able to give him blood. The next day at Cairns Hospital, his leg was amputated.

Queensland Ambulance Service senior operations supervisor Neil Noble said Glenn was extremely lucky. “Had that bleeding not been controlled with direct pressure and tourniquet applied, and blood being given to him by the helicopter rescue crew, I’d give him another 60 seconds and it’s quite possible this gentleman would’ve died from his injuries.” 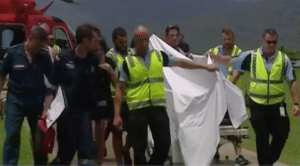 Glenn Dickson being airlifted to hospital

So why did Glenn survive when so many others wouldn’t have? He knew he was in big trouble and remembers hearing Rick say, “You have to go back to your family. You’re not dying today.”

His incredible attitude was the game changer. Glenn remembers that he could have gone to sleep but he chose not to take that option. Instead he thought about his family, and credits that with getting him through.

“His incredible attitude was the game changer.” 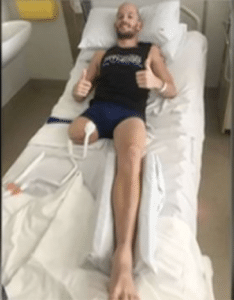 Senior operations supervisor Neil Noble said, “As we got him out of the helicopter he was saying, ‘I really will survive this, this will be OK’.” Then as he was taken into the hospital and the pain killers did their work, he was heard shouting, “I will survive!” He was unconscious for the next five days and later suffered from serious infections including blood clots in his lungs.

Glenn is facing a lengthy recovery period, and life isn’t easy. Since his incredible survival his medical bills have been escalating. Centrelink has refused any disability payments. Now, months after the life-threatening attack, Glenn is learning to walk again with the help of a government funded prosthetic leg. He and his family are extremely grateful for the leg, but because it only offers basic mobility, they would love to be able to afford a “dream leg” which costs about $30.000 more than the basic model. Eventually, he would like nothing more than to run, swim, and play with his two young children again.

Would you have the courage and tenacity that Glenn has shown? Or would you have opted to give in during that horrifying boat trip to land? Glenn says it’s possible to go through a traumatic life changing event and come out the other side. He’s proved it.

“Would you have the courage and tenacity that Glenn has shown?”