Howard Schultz was born in New York in 1953 to a relatively poor family. Growing up, he felt the only chance he would have to make something of himself would be through sport. His determination to succeed on the sports field got him an athletic scholarship to Northern Michigan University where he studied Communications.

A series of jobs followed, and Schultz became the manager of Hammerflast, a drip-coffee maker manufacturer. One of their clients was a coffee-bean shop called Starbucks who sold whole beans and leaf teas. Shultz kept regular contact with them, recognising their expertise in the field of coffee, and eventually became their Director of Marketing.

It was a trip to Europe that sparked the idea of creating a proper cafe. He put the idea to the Starbucks team and they opened one, selling traditional espresso drinks. It was a success but the managers didn’t want to open any more, fearing that they would stray too far from their core business. 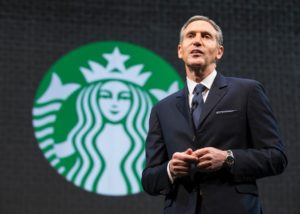 Shultz decided to leave Starbucks and go it alone, although there was a drawback in that he didn’t have any money to get it off the ground. After a year of fundraising, he had $400,000 and opened his first store “Il Giornale”.  Starbucks later decided to concentrate on selling tea, and sold its Starbucks retail unit to Schultz.

“He didn’t have any money to get it off the ground.”

Schultz renamed Il Giornale, ‘Starbucks’, and began expanding across the United States, scorning the franchising idea and keeping ownership over every outlet.

The company went public in 1992 and has continued to grow ever since. Shultz stepped down as a board member in 2013, and as of April 2017 has a personal net worth of 3.1 billion dollars.

“Personal net worth of 3.1 Billion Dollars”

Schultz has won many awards for leadership and business and his charitable foundation actively promotes employment for young people and supporting veterans to successfully manage civilian life.

Howard Schultz is the perfect example of someone who refused to give up. Even though he came from humble beginnings, he worked hard to get to college and was the first member of his family to get a college education. He made a success of his graduate years, rising through the employment ranks from a sales rep to a manager to a Director, to business owner and CEO.

Importantly, he developed good contacts and networks, so that the people he met trusted him enough to invest money in his vision. Even after his success was assured, he kept on working and giving, helping those who weren’t fortunate enough to be able to help themselves.

“He developed good contacts and networks, so that the people he met trusted him enough to invest money in his vision.”

Howard Schultz had a vision that came together from many different sources. He was in the business of selling whole coffee beans and makers for people who had till then preferred to brew their own coffee at home. Giving them the end product in a convivial atmosphere made it an entirely new experience, giving rise to the now common ‘cafe culture’.

Developing new entrepreneurial ideas and solutions can be just a matter of approaching life from an unexpected angle. Try it! What will you come up with?