Overcoming adversity to be the best 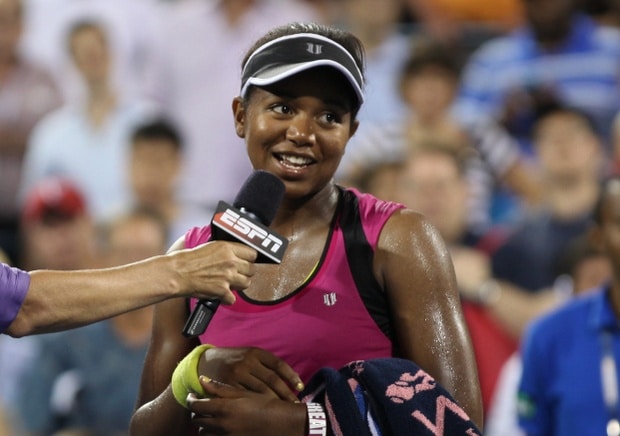 Overcoming adversity started early in Victoria Duval’s life. Today, she is an American professional tennis player. But back when she was seven, she was held at gunpoint in her Aunty’s home in Haiti during a robbery. That was the trigger for her mother to take her and her siblings to America.

Growing up in Atlanta, she worked hard at her tennis. She went professional at the age of seventeen in 2012, making it to the semi-finals of the Junior US Open in her first year. She made more than $230,000 in prize money over two years and climbed nearly 500 places in the Women’s Rankings.

“Victoria Duval faced the biggest challenge of her life.”

But in 2014, Victoria Duval faced the biggest challenge of her life. While on tour at Wimbledon, she was diagnosed with Hodgkin’s lymphoma, a cancer that attacks the lymph nodes. Without treatment, the cancer would eventually spread through her body to her lungs, liver or bone marrow. Undeterred, Duval won another three matches and made her debut in the World Top 100 at Number 92 before returning to America to undergo treatment.

Chemotherapy is an incredibly tough treatment to endure. Duval underwent 5 cycles of treatment which took months, months of blinding headaches, gut turning stomach pains, fatigue and nausea. But by the end of it, she was excited and happy to announce that she was now cancer-free.

But that was not the last adversity to present itself on Victoria’s recovery road. Her muscle mass had deteriorated, and her fitness levels were at an all time low. She practised an hour a day, through pain and sickness, and drew inspiration from friend and superstar tennis player, Venus Williams, who sent her messages of support.

Eventually, she announced her return to tennis and made her post-cancer debut fourteen months later at an ITF tournament near Philadelphia. Her win against Sophie Chang was emphatic, earning her $832 in prize money and leaving the spectators in no doubt whatsoever that Victoria Duvall was back.

“Stumbling blocks on any path to success are inevitable.”

Stumbling blocks on any path to success are inevitable. Yes, cancer is definitely of the more dramatic variety, but many people suffer from adversity of far less magnitude than this and never recover. A rejection letter from a publisher may prevent the budding novelist from ever writing again. Failing to get the promotion may cause someone to leave their chosen field of industry.

We’re conditioned as children to think that success comes from always doing well. It doesn’t. Success comes from making mistakes, learning from our failures, to keep on striving even when the obstacle before us is so large it seems insurmountable. There is always a way past it, if your passion and drive is strong enough.

How does Victoria Duval feel about it? She said in an interview with the Guardian in 2015, “…people say things are unfair, but I feel like if it happens to you it’s because it’s supposed to happen to you. Things don’t just happen. Whatever it is, understand that you have to just hang in there and you’ll get out of it one way or another.”

Wise words from a dynamic young woman. Just hang in there and never give up.