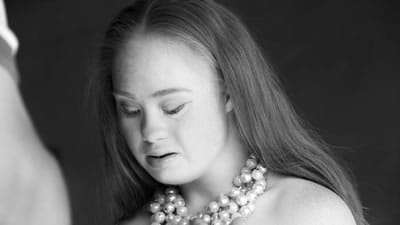 When you have a dream, the only thing to prevent you from reaching it is your willpower and your ability to ‘never give up.’

Madeline Stuart from Brisbane, Australia was born with Down Syndrome. Most of us would imagine that Madeline’s career options would be limited. But Madeline wanted to be a model and nothing was going to stop her.

Madeline was inspired to try modelling after watching a fashion parade. Her mother, far from dissuading her and telling her she could never do it, helped her to keep to a healthy eating schedule (many children with Down Syndrome struggle to manage their weight) and nine months later she was off to her first photo shoot. The pictures that came back were amazing, exuding Madeline’s natural bubbly personality and zest for life. Her mother posted the photos online and they went viral. People all over the world loved Madeline’s pictures. Parents were excited and inspired to see that children living with Down Syndrome could achieve their dreams.

“Madeline Stuart has become the first professional model in the world with Down Syndrome.”

Now at nineteen years old, Madeline Stuart has become the first professional model in the world with Down Syndrome. She has modelled at New York Fashion Week, is the face of cosmetic company Glossigirl, and even has an Ever-Maya handbag named after her called ‘The Madeline’, sales of which are donated to the National Down Syndrome Society. She has also appeared in leading fashion publications like Vogue, Cleo and Cosmopolitan.

Off the catwalk, Madeline makes inspiring appearances at schools and events as part of her #BreakingTheMould tour. She has also been nominated for the Pride of Australia and Young Australian of the Year Awards.

Madeline and her parents know that her achievements are more than just about being a pretty face wearing beautiful clothes. Madeline’s success helps all of us. Her accomplishments make us see the world differently, from halting discrimination against disability to making us see that beauty comes in many packages. Her willpower inspires others, those of us with disabilities and without, to dare to follow our dreams no matter what.

With courage, conviction and passion, every single one of us can achieve our goals and in doing so, help make the world a better place.

What do you dream? What would you like to achieve? Madeline didn’t just put on a fancy dress and get up on a catwalk. She took the steps required in order to do it, by managing her weight and getting it to a healthier level, by becoming accustomed to photo shoots, by spreading her story through the power of social media so that people were already sitting up and taking notice before the big fashion designers did.

What do you need to achieve your goal? The little steps you take now will lead you onward and upward. Perhaps you want to write a book or learn an instrument or try a new career path. Whatever you decide to do, make sure you take little nibbles at it every day. If you have the willpower, the big goal won’t seem as hard when it’s broken down into manageable bites.

Be wholehearted. Be focussed, be passionate. Or your dream will stay exactly tha t – a dream. Ask yourself – what would Madeline do?