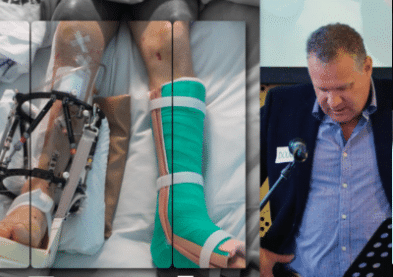 There are people who let these mistakes drive them to anger. You see this in the sports world all the time –  an unforced error here, a trip, an accidental free kick to the opposing team, and then the anger takes over. People get angry, lose focus, and lose. Simply because they let their mistakes get to them.

Then there are those who simply take mistakes as lessons or a challenge to improve, to adapt!

My motto has been to “never give up” – though in order to do this you have to forgive yourself and others first.

In 2014, I almost lost my life in a head-on vehicle collision. During my slow and painful recovery I realised that something more than just physical rehabilitation was needed (although I would not be walking again today without it!) I needed to forgive the driver deemed responsible for that collision.

What I did not know was that four years after the crash that other driver still had not forgiven himself.

“I needed to forgive the driver deemed responsible for that collision.”

He had gone through depression and anxiety – a life which was suffering. I realised that mentally I had come out alright after the accident, well, far better than he had. I had been to some very dark places following that unforgettable day, but four years on the difference in mental health between myself and the other driver was alarming.

“I wish now that I had contacted him sooner, but I had followed my lawyer’s advice not to.”

I wish now that I had contacted him sooner, but I had followed my lawyer’s advice not to. I felt guilty about this, and in the end, the accident was found not to be his fault either, just a very unlucky incident for us both.

Getting in touch was such an important step to recovery. I only wish that process – made possible through forgiveness – could have started before guilt began to fester.

Guilt is worth addressing before the negativity builds up. It doesn’t matter if this guilt is the result of one big misstep, or smaller events which then become chronic pain. By being unforgiving to oneself you cannot move forward, and therefore you cannot have any sense of closure.

Forgiveness is not a one-off event – it is a process, and for most people, it will take time.

Here are six ways you can start to forgive yourself:

Take responsibility for your mistake/actions. Don’t make excuses or rationalise. Then move on.

Leave the past where it should be, in the past.

Humans are made to fail miserably and made to be brilliant. There are two sides to every coin.

Don’t be so hard on yourself.

You are not a bad person if you make a mistake or fail. You are human.

Let others in and talk. Many people especially men keep their emotions locked up and eventually explode. Make plans, and ask for forgiveness.

Challenge yourself to do better.

See mistakes as an opportunity. Work on the flaws that you think you may have.

There is no substitute for making someone else’s life a little better. Be that giving to the community, volunteering your time, or a simple act like paying for a friend’s or even a stranger’s meal.

You cannot change the past, and you can’t always control what happens. What you can do is change your perspective – and that is what really counts in the end.