A Single Moment in Time Can Change a Life 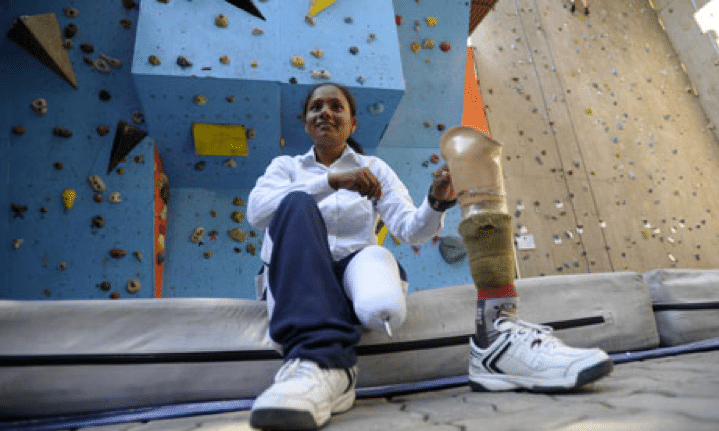 For Arunima Sinha, that moment was when she boarded a train bound for Delhi. She was just twenty-four years old, a former national volleyball player heading toward an offer of employment. Instead, she was hounded by four thugs, who first tried to rob her for the gold chain around her neck, and then threw her out of the moving train.

She landed on the railway tracks and another train ran over her leg, severing it. She lay there at night in agony while rodents feasted on her wounds. Forty-seven trains passed her by while she bled but nobody helped her until dawn, when she was found by poor villagers.

They took her to the nearby hospital where her leg was immediately amputated. The hospital had very little in the way of supplies and her leg had to be removed without anaesthetic. The pharmacist donated his own blood to keep her alive and she recalls how a stray dog slunk into the ward shortly after and began gnawing at her severed leg.

She didn’t realise that her story would turn into a media frenzy, but it did, and soon the authorities were trying to escape blame by calling her tragic experience an accident that had happened while trying to escape the ticket collector. When this was disproved when she was seen on CCTV camera recordings buying a ticket, they called it a failed suicide attempt instead. Eventually Indian Railways were ordered to pay her compensation.

Arunima Sinha should have died on the tracks, but she didn’t, and her will to not only live but to clear her name, sustained her through her recovery.

She decided that to prove her innocence, she would climb Mt. Everest.

Once out of hospital, she did a brief mountaineering course and then trained for eighteen months. Eventually she felt ready to tackle Everest, even though her Sherpa kept telling her she was on a suicide mission. It was a tremendously difficult climb, made all the more so with her prosthetic leg. Below the summit she saw the dead body of a man she had met just the day before, and after she finally ascended, she nearly ran out of oxygen and almost didn’t make it down again.

She was the first amputee to climb Everest and was awarded the fourth highest award an Indian civilian can receive, the Padma Shri.

Arunima Sinha has said, “Failure is not when we fall short of achieving our goals. It is when we don’t have goals worthy enough.”

“Failure is not when we fall short of achieving our goals. It is when we don’t have goals worthy enough.”

She never gave up on her dream to climb Everest. And if it hadn’t been for that moment on a train, she may never have even dreamed it in the first place, or gone on to inspire thousands of men and women around the world to chase their dream and never give up.

“Arunima has inspired thousands of men and women around the world to chase their dream and never give up.”

Arunima’s moment was about as traumatic as it could possibly be. Your moment could be a quiet action or realisation that doesn’t seem important at the time. Whatever its form, it will change your life too. What will you do with your moment?