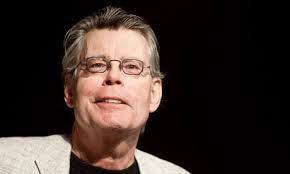 Stephen King (born in 1947) has terrified, horrified, disgusted and entertained millions of readers and viewers worldwide. He is, of course, the highly successful, multi award-winning writer of novels, short stories, novellas and screenplays. Many of his written works have been turned into movies, television shows and comic books. The main genre he is known for is horror, although he has written science fiction, fantasy and drama, and has written bestselling non-fiction books as well.

Stephen King and his brother David, were brought up by his mother after his father “went out to buy cigarettes” and never returned. Growing up mostly in Maine, USA many of his books are set there. He began writing when he was in high school and sold his first short story in 1967.

He worked a number of low-paid jobs before landing a teaching job at a local high school, but continued writing short stories and drafting ideas for novels.

He tells a story of when he was young, pinning all his rejection slips on a nail in his room until there were too many and he had to replace the nail with a spike.

In 1973 he finished the manuscript for his first novel “Carrie”. One of the rejection slips he received said, “We are not interested in science fiction which deals with negative utopias. They do not sell.”

When “Carrie” was finally published, it sold over a million copies in its first year and he was able to leave teaching and start writing fulltime.

His writing career went from strength to strength but in his personal life, he was facing demons of his own. During the 1980’s Stephen King suffered from severe addiction to alcohol and other drugs. He has said that he can barely remember writing the bestselling horror, “Cujo”. It got to the point where his family and friends had to stage an intervention, displaying the copious amounts of narcotics and alcohol collected from his study. Stephen King got help, became sober and continued to write.

Stephen King is a shining example of a person who didn’t let failure define him, who achieved success by the simple fact of never giving up. He could have let his background and lack of financial privilege hold him back, but he didn’t, he pushed on regardless. He could have received one rejection and decided that writing wasn’t for him, but he didn’t. He continued to write and submit, learning from each rejection, honing his craft and his skills.

Having already achieved literary success, he could have succumbed to his addictions, spent his royalties on hedonistic, destructive pleasure… but he didn’t. He got over it and moved on.

Stephen King was motivated by his goal, to be able to earn money while sharing his stories with the world. Even now at the pinnacle of success, with money hardly being a motivator, he still writes and still wants to share his creativity.

Is your goal enough to motivate you to extraordinary lengths? If not, maybe it’s time to find a new goal.