Inspiring People with Whatever You Have 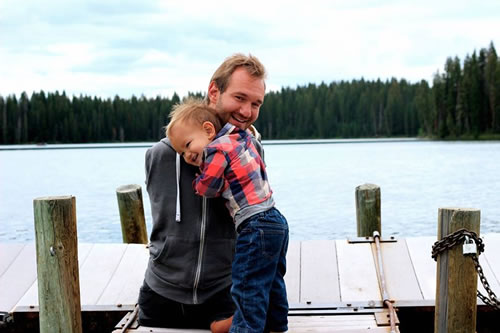 No matter the cards you are dealt in life, your story is inspiring and you can motivate others.

Life can be an uphill slog for most of us… but can you imagine doing it without arms or legs?

Nick Vujicic (pronounced VOO-yee-cheech) is an inspiring leader and motivational speaker. He’s also an author, musician, actor and dynamic evangelist. These many accomplishments and successes would be deemed extraordinary for even an able-bodied person, but in Nick’s case, they’re nothing short of miraculous.

In 1982 in Melbourne, Nick was born with malformation of the limbs due to a rare congenital disorder – phocomelia. He was born without hands or arms, and had two small, deformed feet (one of which he calls his ‘chicken drumstick’). One foot was operated on to separate the fused toes, which meant that later in life, Nick was able to operate a wheelchair, computer and mobile phone.

His early life was hard. Directly after he was born, his mother refused to hold or even see him, but with the strength of their religious faith, she and her husband eventually accepted their son as he was and loved him dearly. This didn’t prevent the bullying from others during his childhood and adolescent years, and as well as all the usual teenage drama, Nick also suffered from loneliness and depression. He says he couldn’t stop asking the unanswerable – “Why me? Why was I the one born this way?”

His life turned around after an inspiring discussion with a janitor at his school. He told him to share his story with others about overcoming adversity. He began speaking at local prayer meetings, and at 19, took on his first speaking engagement.

That led him to what he considers his true purpose in life, inspiring others through his own life story. He has travelled around the globe and inspired millions with his simple message: no matter what your circumstance, you can always overcome.

Nick started a non-profit organisation called ‘Life without Limbs’ which aims to spread his religious beliefs by sharing stories of his own life. He has also founded a company called ‘Altitude Is Attitude’ which empowers people to change their lives, through live events, motivational seminars and more.

So how is it that Nick has achieved so much on top of managing all the daily struggles of living a life with a disability? Nick credits it all to his enduring belief in his faith. He feels that God has chosen him to spread the Good Word by using his own life story. In other words, his disability was conferred on him by God in order to achieve a higher purpose.

Whether you concur with Nick’s beliefs or not, the fact remains that Nick has achieved something extraordinary.

He has an enduring belief in himself. He has overcome the disadvantages of his life through determination, hard work and willpower. He had a vision to succeed and he has driven himself to achieve it.

Nick Vujicic is the epitome of what it means to never give up. Or as he says:
“Defeat happens only to those who refuse to try again.”