The Bulldogs create history because they never gave up 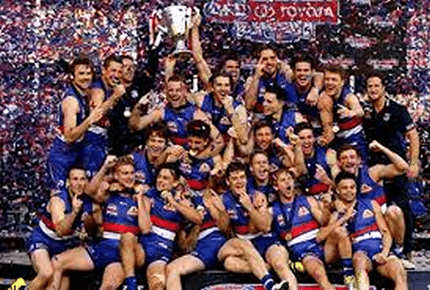 What a win. What a week. Who’d have thought it? There were tears and jubilation in the crowd and on the field as the Western Bulldogs ended their drought and hailed the start of a new era, by beating the Sydney Swans in the AFL Grand Final by 22 points a couple of weeks ago.

Nearly 100,000 fans jammed into the Melbourne Cricket Ground, while the fourth largest television audience ever – three million people – tuned in to watch the match from across Australia.

All the horrors of financial crises, potential mergers, and rebranding were pushed aside as the team celebrated their premiership triumph for the first time since 1954. Bulldogs players and fans were in tears as the longest current AFL premiership drought finally ended in high drama. They became the first team to ever win the AFL flag after finishing seventh on the ladder – and the second team to win four finals en route to a flag.

And what a triumph for senior coach Luke Beveridge, after joining the Bulldogs only two years earlier when they were in crisis. He described the players as “just incredible.” Speaking to the fans, he added: “We know how long you’ve waited for some success. And we really thought at half time that it was going to take something extra special, even though they had given their all already.”

Bulldogs’ utility Lachie Hunter said with typical understatement: “It was nice to run around for the last minute or two knowing that we were going to win the flag.”

So how did it happen? How did the decades-long underdogs finally triumph? The Age described the Bulldogs as “a team that nearly died from lack of love.” It’s pretty hard to recover from that level of despair.

“They’re the team the AFL once wanted gone and now they’ve gifted the game its best story for years.”

Yet, simply, the team never gave up. In the run-up to the final, they went to Perth as underdogs and won. Then they ended Hawthorn’s hopes. They played the Giants and won. And, as underdogs – again – they met Sydney and won. We can only speculate how their tension and hopes increased amongst the team and support staff match by match. What amazing perseverance! They’re the team the AFL once wanted gone and now they’ve gifted the game its best story for years.

As Luke Beveridge said of his men, “Their hearts are so big.” Indeed. And you too, Luke. You’ve been the key to an inspirational example of never giving up. You’ve maintained it through a gruelling run-up and an amazing match upset.

It can’t get any better than that.