Chantelle didn’t give up 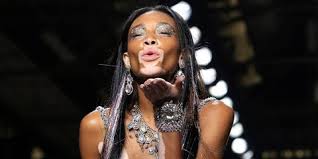 Chantelle Brown Young was diagnosed with the skin condition vitiligo

Chantelle Brown Young, now known as Winnie Harlow, was born in Toronto in 1994.

At a young age, she was diagnosed with the skin condition vitiligo, an immunity irregularity which attacks melanin production causing de-pigmentation of the skin. Of Jamaican ancestry, Harlow’s deep brown skin is marked with patches of white, where her natural skin colour doesn’t show.

Because of her unusual colouring, she was mocked and bullied throughout her childhood and adolescence. She was called a ‘cow’ and a ‘zebra’ and other unkind names. To escape the harassment, she switched to different schools, eventually dropping out of high school altogether. She even contemplated suicide.

Harlow’s life took a far different turn thanks to the power of social media. Supermodel Tyra Banks, host of the wildly popular show, America’s Next Top Model, discovered pictures of Harlow on Instagram. Harlow’s tall, slim frame, beautiful features and unusual look, made her a great choice as a contestant, and eventually she finished the show after thirteen episodes, placing sixth overall.

America’s Next Top Model was a springboard into a successful career as a model. She is now the brand ambassador for Barcelona based clothing brand Desigual. She has modelled for top publications ID, Dazed, Vogue Italia, Cosmopolitan and Ebony. She has also appeared in commercials for Diesel, Sprite, and Swarovski, and in music videos for the Black Eyed Peas, Eminem and Beyonce.

But her career isn’t just about wearing pretty clothes in front of the camera. Harlow wants to change the world’s perception of beauty and to embrace inclusiveness. In 2011 she posted a YouTube video called ‘Vitiligo – a skin condition, not a life-changer’ which to date, has more than 600,000 views. She gave a TED presentation in 2014 talking about living with vitiligo and in 2015 she was a panel member as part of the Women in the World Summit. That year she was chosen as one of BBC’s 100 women, and she also won GQ Portugal’s Role Model of the Year.

Winnie Harlow is living proof that you are not the sum of how others see you. Some people perceived Harlow’s skin condition as disfiguring and ugly. They almost convinced Harlow too, to the point where she was ready to take her own life. But she didn’t. She grew stronger for it. She turned their negativity into a positive, posting selfies on social media and celebrating her uniqueness. And in the end, her unusual colouring enabled her to get to the top of a profession which celebrates beauty. The positive beat out the negative. She didn’t give up.

Turning our negative thoughts into positives is the fastest way to achieve success. Top athletes don’t look at the finish line and think, ‘I’m going to fall over halfway and get trampled!’

Rather, they think, “I am going to WIN.”

What goals do you have for yourself? Doubts and fears may creep in from time to time. That’s only natural. Don’t let the negativity hang around or it will sink its claws in for good. Do you fear your goal is too lofty? Break it down into small, manageable steps. Are people doubting your project? Remember, you can’t change everyone’s minds – but you can change your own.

Harlow turned her life around, she never gave up. You can too.