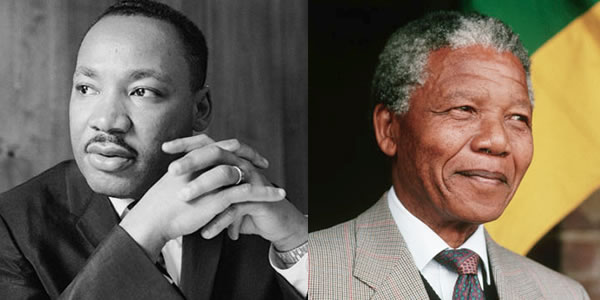 It takes a very special person to stand up against an unfair regime, to be a lone figure against an established order brought about by the tyranny of the majority. It takes a very special person with a wholehearted belief that what they’re doing is more than for the benefit of the few – it’s for the benefit of mankind as a whole.

History has given us many men and women who are inspirational teachers, wise leaders, beacons of light who shine truth and justice into the darkest of places. More often than not they appear when we need them most, and are at first ridiculed and reviled… until the message that they bring becomes so powerful that it resonates within all of us and brings the walls of discrimination and fear crashing down.

Two such figures in our recent history are names that we know and treasure. Martin Luther King, the minister and activist who helped direct the course of the Civil Rights Movement in America by using non-violent means, and Nelson Mandela, revolutionary and politician who helped dismantle South Africa’s apartheid system and bring about reconciliation between races.

Both men suffered at the hands of an unjust system and yet both never gave up on the hope for a better world. Mandela was imprisoned for 27 years and became South Africa’s first democratically elected black president. Martin Luther King was imprisoned many, many times but still emerged to fight on, albeit peacefully.

“Both men suffered at the hands of an unjust system”

Both men had charm and charisma. Both men were able to galvanise their followers and inspire thousands more through the speeches they made and the active stance they took. Both men were prepared to go to the very limits of their endurance for the sake of their beliefs. Both men worked hard ….and smart.

Their names are instantly recognisable, their prestige undeniable. They are revered for their efforts to make the world a better place and they are loved for their unswerving dedication to a higher cause.

Do they make you feel humble? Do they inspire you to fight for your own beliefs? Does their message of hope live on within you?

We may possibly never be able to do what they did. But we can learn from what they did and apply that knowledge to our own daily lives. Some of those lessons include:

To be strong and unyielding.

We can be that too. We don’t have to succumb to the naysayers and doubters who will try to knock us off course.

If we want something bad enough, we have to work for it. And we can ask for help along the way. Neither Mandela nor King did it alone, they had smart advisors and they knew there is strength in numbers.

To persevere for others.

A selfish reward isn’t the sweetest. The work we do for others brings the greatest joy and happiness. Giving back to our community is necessary to build a brighter future for us all.

Not necessarily in a deity, but faith in our cause. If you have doubts, others will too. And if you don’t succeed today, have faith that with hard work and determination, success will surely come tomorrow.