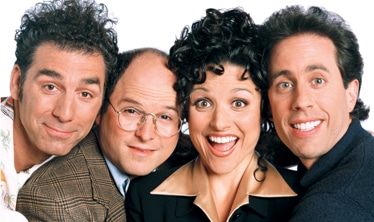 Jerry Seinfeld is one of the greatest comedians of our time and will forever be remembered as the creator and star of the hit show ‘Seinfeld’, one of the iconic TV shows of the Nineties.

“He started at the very bottom.”

He is a huge success now, but, like many of us, he started at the very bottom, working as a stand-up comedian in small clubs around New York City. His deadpan delivery and observational jokes about the everyday nuisances of life eventually got him his first break, working as a recurring extra on the TV show, ‘Benson’. Unfortunately, he was fired and nobody bothered to tell him. He only found out when he turned up for a cast reading and there was no script for him. Ouch!

His next break came with an appearance on the Tonight Show that impressed Johnny Carson so much, he was invited back again and again. He also appeared on ‘Late Night with David Letterman’.

He caught the eye of NBC Network executives who offered him the chance to create a show. They had envisioned Jerry hosting another ‘Late Night’ type show, but he decided he wanted to do a sitcom, playing himself, “just making fun of stuff”.

“They committed to making a pilot… which then bombed during its test audience screening.”

NBC wasn’t too thrilled with this idea, especially as they had no idea who the writer was that Jerry had chosen, Larry David. But they committed to making a pilot… which then bombed during its test audience screening.

However, one NBC executive still loved it and pushed to make four more shows which turned into thirteen. Eventually ‘Seinfeld’ ended up running for nine seasons, won many awards and launched the careers of all four main actors into the stratosphere.

Many successful people get to where they are because they have a dream and an unrelenting determination to get there. Not so for Jerry Seinfeld. Throughout the whole painful process of getting his TV show to air in the first place, he approached it with his trademark air of ‘what will be, will be’. In other words, he didn’t stress out about it, because he knew that he could always return to his first love of stand-up comedy and make a living from it.

‘The Law of Attraction’

Perhaps Jerry Seinfeld used the Law of Attraction in a positive way – by putting in the work he needed to do to get the show up and running, but not becoming so consumed by it that it slipped through his fingers. Of course, he was also lucky enough to have mentors and supporters who believed in him and his unique brand of comedy, who had enough clout to make it a reality.

Seinfeld’s never give up attitude attracted the positive team around him to make his dream a reality.