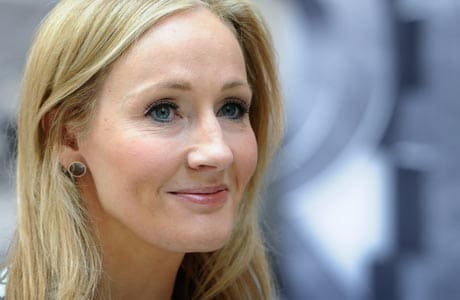 J K Rowling (Joanne) is a household name, the author of the phenomenally successful “Harry Potter” book series, which follows the fortunes of young Harry Potter and his friends as they attend Hogwarts School of Witchcraft and Wizardry and join in a quest to defeat the evil Lord Voldemort.

These books (as of 2013) have sold more than 500 million copies worldwide and have been translated into 73 languages. This makes Harry Potter the most successful bestselling series in history. And of course, the books also spawned a highly popular movie series, associated merchandise and spinoff books, films and theatre productions, making the Harry Potter franchise a multi-billion dollar business.

‘Harry Potter’ began life, in the most humble way, in the author’s head as she was on a delayed train from Manchester to London. During the next few years, Rowling’s life headed into a downward spiral, as first her mother died, and then her tumultuous marriage of four months broke up, leaving her with a baby girl to bring up alone. She had no job and was forced to sign up for welfare benefits.

“Her agent submitted it to twelve publishing houses, all of whom turned it down”

During those hard years, she wrote her first manuscript for “Harry” in cafes (the walk helped put baby Jessica to sleep), and finally finished it in 1995 on an old manual typewriter. Her agent submitted it to twelve publishing houses, all of whom turned it down. And then the small publishing house Bloomsbury picked it up after the editor’s daughter read the first chapter and then demanded to see the rest.

And the rest of course, is history. Bloomsbury made an initial print run of only 1000 books. It won three awards and became a bestseller. The seven book series continued to win awards and smash bestselling records, culminating in the last “Harry Potter and the Deathly Hallows” book which sold 11 million copies in its first day of sale.

The result is that J K Rowling is one of the most successful authors of all time and a multi-millionaire – a far cry from her early beginnings.

“You might never fail on the scale I did, but some failure in life is inevitable.”

She has often talked about the benefits of failure. In a speech to Harvard graduates in 2008 she said: “You might never fail on the scale I did, but some failure in life is inevitable. It is impossible to live without failing at something, unless you live so cautiously that you might as well not have lived at all – in which case, you fail by default.”

You may or may not reach the pinnacle of success that J K Rowling has (although nothing is impossible!) but it’s important to remember that every person’s definition of success is different. A job promotion could mean success for you, whereas taking positive steps to modify diet and increase exercise could spell success for someone else.

J K Rowling chose to move forward. I have faith you can too.